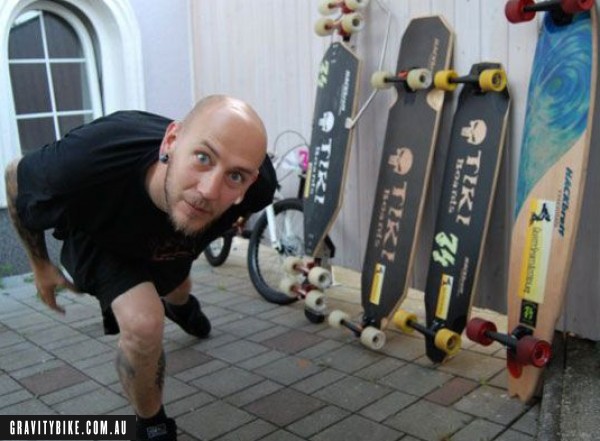 Since 2002, the IGSA has designated one event per year as the official IGSA World Championship. The athlete who wins their respective class at this event earns the title of IGSA World Champion for the year. GBHQ took the time to catch up with the latest Gravity Bike World Champion, Alexander Frischauf!

GBHQ: Where do you live?
AF: Strass im Attergau, Austria

GBHQ: How did you first get into riding gravity bikes?
AF: 2009 race season

GBHQ: Tell us a little about the bike you were riding?
AF: It`s a cheap bmx – flipped the frame for a staple ride and more wheelbase, selfmade handlebars, chopper seat, cable operated disc brakes

GBHQ: Tell us a little about how the gbike scene evolved in your part of the world?
AF: There`s no gbike scene at the moment, because there are no major races where gbikes allowed. There are some riders in the UK and France and as I know in italy – but I think there only 5–10 active riders in europe

GBHQ: When was the first time you saw a gravity bike?
AF: 2004 at Almabtrieb IGSA World Champs

GBHQ: If you could choose to ride anywhere, where would you ride?
AF: Every IGSA race – but I think the “Grossglockner” (big austrian mountain) is the next thing to be ridden!

GBHQ: What is your fastest recorded speed?
AF: Nearly 85 kph

GBHQ: What do you think it will take to get gravity bikes back on the map?
AF: IGSA is the sanctioning body, so we should be allowed to ride at every of their races – not depending how many of us are competing. Only if spectators see us riding new people will start with it!

GBHQ: What advise would you give to young up and coming riders?
AF: Go out and ride! You don`t need a high tech bike for having fun!

GBHQ: Tell us a bit about winning the 2010 World Championship, 2010 Euro Championship all at once?
AF: “Only” won the Worldcup 2009 – it was no deal with beeing the only rider with more then one race.

GBHQ: What's next for you?
AF: Get other promotor to include gbike in there races and sell some of our bikes (we the only store selling gbikes for beginners! – www.longboardalm.at

GBHQ: What do you think is next for the sport?
AF: Don`t know – if we not allowed to race at more events – there is not much of a future, maybe an own gbike assosiation is a way to go!